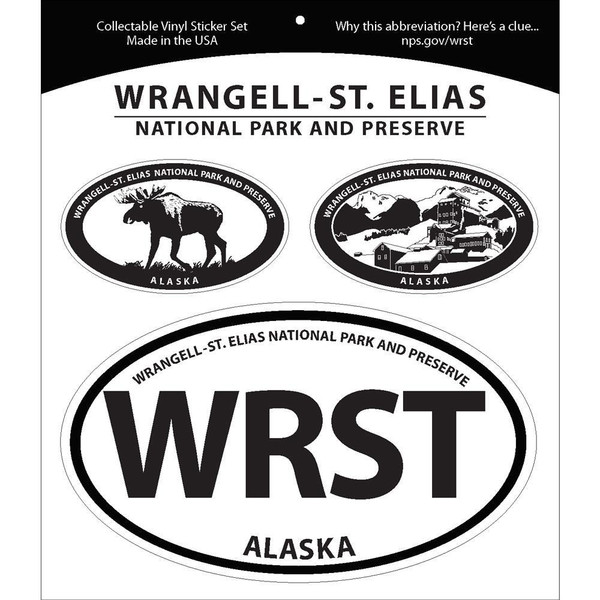 Collectable vinyl sticker set. Made in the USA.

Where does this WRST abbreviation come from? The National Park Service assigns each unit it manages (National Parks, National Monuments, National Historic Sites, etc.) a unique abbreviation code to help standardize communications both internally and externally. But due to the large number of units involved something as simple as SNP, for example, was not going to work because which national park would you be referring to-- Saguaro, Sequoia or Shenandoah? Can you figure out the basic pattern they ended up using for these abbreviations (as in most cases, there are exceptions to the rule)?
1. A four-letter combination.
2. If a unit name consists of two words then it’s assigned the first two letters of each word. (i.e. LAKE CLARK National Park & Preserve = LACL)
3. If a unit name consists of only one word then it’s assigned the first four letters of that word. (i.e. KATMAI National Park & Preserve = KATM)
So, become a National Park System Insider by learning and using these abbreviations.
For fun and practicing your detective skills - see how many exceptions to the rule you can find!

At 13.2 million acres, Wrangell-St. Elias National Park and Preserve is the largest national park in the United States. Ernest Gruening, Director of U.S. Territories, was the first to recommend protected status for the area. After visiting the area in 1938, he wrote, “The region is superlative in its scenic beauty and measures up fully and beyond the requirements for its establishment as a National Monument and later as a National Park. ...It is my unqualified view that this is the finest scenery that I have ever been privileged to see.” In 1978, it gained National Monument status and was finally designated as Wrangell-St. Elias National Park and Preserve as part of the Alaska National Interest Lands Conservation Act by President Jimmy Carter in 1980.

Sticker - It's A Conspiracy! Raven