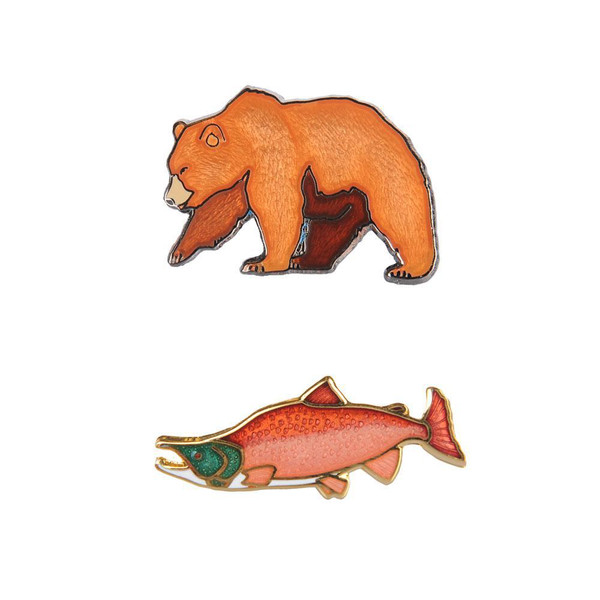 Save with this great two pin set for Katmai National Park and Preserve featuring a grizzly bear and a sockeye salmon. These pins come mounted on a card with species information.

GRIZZLY BEARS can be found in Alaska, Canada and the mountains of the northwestern United States. Larger than the black bear, a Grizzly Bear can be distinguished by its concave face, high-humped shoulders and long, curved claws as well as shorter, rounded ears. Its thick fur, varying from light brown to nearly black, may appear frosted or 'grizzled'.  Much of their diet consists of fruit and shrubbery, with an affinity for salmon.

SOCKEYE SALMON are the third most abundant of the Pacific salmon species.  Silver and blue-hued while in the ocean, adult spawners typically turn bright red in fresh water, giving them the nickname of 'Red' salmon. Juveniles will remain in or near lakes for 1 to 3 years before migrating to the sea. Unlike other salmon species, Sockeye feed extensively on zooplankton, which they strain through their numerous gill rakers.