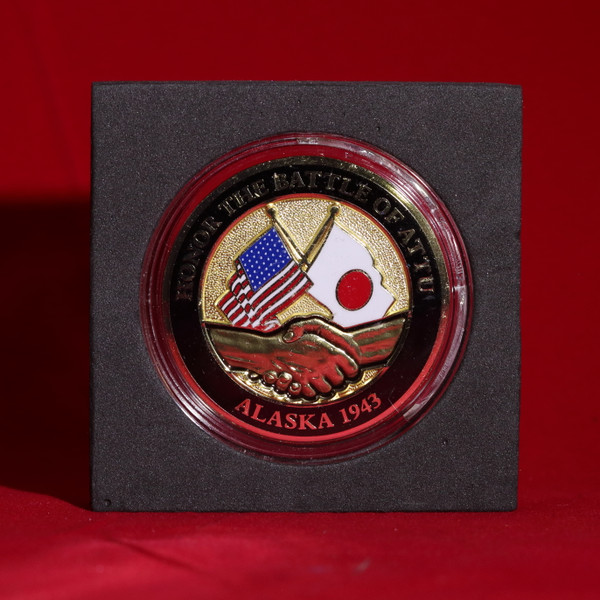 This bronze coin honors the citizen and soldier sacrifices of the Battle of Attu and emphasizes imagery of peace between the United States and Japan. These coins were presented to visiting dignitaries and veterans during the 75th anniversary of the Battle of Attu commemorative events held in Alaska.

The front of the 1.75" coin shows two hands shaking in front of crossed American and Japanese flags (depicted as they appeared in 1943). Around the edge are the words "HONOR THE BATTLE OF ATTU" and "ALASKA 1943".
On the back of the coin is an outline of the state of Alaska over Aleutian Cackling Geese and beach grass, with the name of Attu Island written in English, Japanese, and Unungax.

For thousands of years, Attu was home to people and wildlife. Long before the war, Attu was one of the earliest Federally protected wildlife resource areas. The Battle of Attu forever changed the island, its inhabitants, and the lives of those who waged battle there, leaving behind scars and stories scattered among the national wildlife refuge that exists today. May 11, 1943, forever marked a chapter in the world’s history, in a national wildlife refuge’s history, and in the lives and legacies of people who lived and died on a remote and rugged island that rises out of fog as far west as one can journey in North America. Today, Attu still bears the scars of this brutal battle between the United States and the Empire of Japan. The people that lived on the island, the soldiers on both sides who fought there, and the descendants of all of these citizens and warriors will forever bear their marks of battle too.

Passport to Your National Parks Booklet